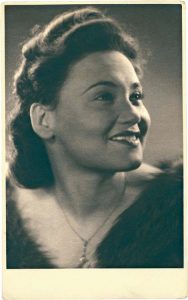 In May 2011 Jenny Chaenkel visited our Exhibition Street office to have her will written with us. Our expert lawyer took the time to capture her wishes and ensure they were reflected in her will. Jenny Chaenkel is a Holocaust survivor and it was her wish that, after providing for close friends, the rest of her estate be distributed to the Jewish Holocaust Centre in Elsternwick.

She also entrusted State Trustees with the important responsibility of being executor to her estate. In January 2018 Jenny passed away and in accordance with her wishes, we distributed $3.1 million to the Jewish Holocaust Centre, the largest ever individual donation to the centre. Her generosity will help construct the new Jewish Holocaust Museum in Elsternwick.

When war broke out, there were 17,500 Jews in the town of Lutzk, Ukraine which had a population of 40,000. After being occupied first by the Soviets, Lutzk was invaded by the Germans in 1941 and Lutzk’s Jews, including Jenny and her family, were forced into a ghetto.

Epidemics were rife, and Jenny contracted typhus, then spotted fever. Jenny had been training to become a nurse. Her parents, Lev and Ida, had arranged for her to get false papers through a doctor at the hospital where she was working. When the papers were ready, she hid in the doctor’s cellar.

However, the next day she discovered that the Lutzk ghetto had been evacuated, with most Jews massacred. She rushed in to find that her parents and brother Bezalel were spared. For the next four months in the ghetto, the family endured disease, starvation and forced labour.

On 26 July 1942, the Lutzk ghetto was surrounded by Ukrainian collaborators and the remaining Jews were rounded up and assembled in the town square. With a last glimpse of her parents in the town square, Jenny and her brother slipped away and hid in a tiny cellar with 14 others.

After 30 hours without food or water, they left the cellar and sought refuge with their neighbours. At daybreak, Jenny returned to the ghetto, but her brother refused to come with her. This was the last time she saw him.

Jenny continued her exile avoiding roads and reached a cluster of farmhouses. She was directed to a poor Baptist family: a preacher, his wife and nine children, who were also hiding a Jewish teacher and young boy. After some weeks, Jenny was relocated to another family but, as she had nothing to barter, they would not shelter her.

As she fled in the darkness she heard gunshots, and saw fire in the distance, realising that this was a final purge of Jews. With feet wrapped in rags, she walked in the opposite direction and was given shelter in the hay-barn of a kind Baptist in the next village. It was now the winter of 1942.

News of Soviet advances gave hope, but Jenny’s hiding place in a hay silo provided little protection from the lethally cold winter. After begging with frozen clothes and hair, she was allowed inside the house. Finally, the Soviets liberated the region, but Jenny was not yet free from danger as she was nearly shot by a Soviet State Security officer for not having papers. But then freedom came.

We feel privileged to work with heroes like Jenny, helping to fulfil her wishes and tell her story.