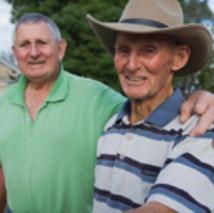 Who can you trust with your financial powers of attorney?

Financial elder abuse is often a hidden and complex problem that is difficult to identify, hard to prove and can be hard to fix once it is discovered.

One thing is for certain – most people don’t think it will happen to them. But it can and it does.

Unfortunately, elder abuse can be difficult to prove, hard to recover lost money and it can have a terrible impact on the wellbeing of vulnerable people nearing the end of their life. By far the best protection is to have your wishes for an independent administrator such as State Trustees documented through an Enduring Power of Financial Attorney long before you need to activate it.

While difficult to quantify, State Trustees research commissioned through Monash University estimates that up to five per cent of people aged 65 and older have experienced and reported financial abuse. With a rapidly ageing population that is living longer this problem is only going to get bigger.

The State Trustees research shows that sons and daughters are the most common perpetrators of financial elder abuse followed by close and trusted people such as spouses/partners, carers, extended family and neighbours.

Women over 80, people experiencing social or physical isolation, people with deteriorating mental or physical health and people from culturally and linguistically diverse backgrounds are the most vulnerable due to their dependence on other people for their daily living needs.

According to the research, a high proportion of people choose to live with the abuse rather than make a fuss or break up a family unit or a friendship. For others, they don’t know where to turn to for help, they are too scared to take action or they aren’t confident in managing their own affairs.

The good news is that in recent years, many organisations have been working to bring the issue of financial elder abuse to the fore. There are many new resources now available to help spot the signs and to help stop the abuse once it is identified and Australia’s involvement in World Elder Abuse Day is growing every year.

Prevention and early intervention are also making a difference through formal agreements within families and the use of independent financial administrators such as State Trustees.