Home / Don’t Forget your Will and Powers of Attorney

Don’t Forget your Will and Powers of Attorney 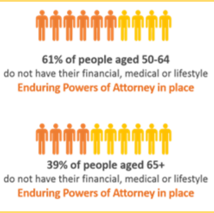 An estimated 34,000 people in Greater Bendigo don’t have a Will and around 72,500 are without an Enduring Power of Attorney according to the latest research from State Trustees.

To help empower Victorians to take action, State Trustees has introduced a Planning Ahead guide, has recently launched an expert video series and regularly hosts information sessions including two upcoming webinars on 12 and 25 August with Bendigo-based Will writer Matthew Scott.

Matthew is encouraging people to take the important step of preparing their Wills and enduring powers of attorney for financial, medical and lifestyle decisions sooner rather than later.

“Making a Will is an important part of planning ahead but something that far too many people readily admit to putting off even through key life stages like having children, buying property or getting married,” Mr Scott said.

“If something happens to you and you do not have a Will, or if you are still alive and you don’t have Enduring Powers of Attorney in place, things can get very complicated at a time that is already difficult for your loved ones. This is easily avoided with some simple planning sooner rather than later.”

Read more in the Bendigo Weekly