How much do Victorian’s actually know about their family history? We did some investigating to find out.

In August 2015, State Trustees commissioned a research project to investigate and understand the awareness levels among Victorians of their family history and their individual family stories. The online survey comprised of 1,014 Victorians over the age of 18 years from the Melbourne metro and key regional areas. 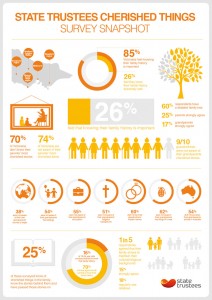 This research was part of the ‘Cherished Things’ campaign, an initiative by State Trustees to increase awareness of sharing family memories and leaving a legacy. You can watch the unique stories of three Victoria families here at – cherishedthings.com.au